A SHELTER FOR AN BINH ELEMENTARY SCHOOL

I have a confession. I actually did not want to go on the ACTS Battambang mission trip. It was my wife who signed up and I got dragged along. I actually felt that I had better things to do with my time and energy. As the months passed and the mission trip drew nearer, I started feeling a greater sense of negativity – “Why am I doing this? What if I hate the experience? I don’t even really want to go!”

That’s when things started getting interesting. God really works in mysterious ways that we cannot begin understand. Due to unforeseen circumstances, various people had pulled out from the trip. As a result, my wife and I, together with other participants, were encouraged and propelled to step up and take over some of the planning and administrative preparation for the trip. Slowly, I felt my hardened heart softening. I do admit that while some fear and uncertainty still plagued me, I did not feel as helpless and alone, because I believed and felt that God was with us.

2013 marked the first time that the ACTS Battambang mission reached out to the villages outside of Battambang city. The ACTS participants who went to Nikum, Chomnoum and Tahen villages, humorously dubbed “The Village People”, spent a total of four days interacting with the kindergarten kids, giving the kindergarten classrooms a fresh coat of paint and delivering love parcels of rice, salt, sugar, fish sauce and soy sauce to needy families in these villages.

At the Don Bosco Vocational School for Girls in Battambang city, the team spent five days giving the girls lessons in English, music, dance, makeup and personal grooming. For the ACTS participants, it is encouraging to see how the girls actively participated in the lessons despite the language barrier between us. Finally not forgetting the Kitchen team who woke up at 5am each day to buy the freshest ingredients to prepare hot food for the team.

The entire group of 29 ACTS participants also had the opportunity to visit Phum Pheas, a village that had been badly affected by a flood a few months earlier. Many families in this village had lost nearly everything they owned. The ACTS participants visited these families and also distributed love parcels. This visit also gave the team a better understanding of the needs of the villagers and potential outreach projects in future.

There will always be times during mission trips when we get stressed and worried that the task is too huge for us to handle. Then we can look to Mother Mary’s example of faith in God at the Annunciation. Despite her young age, she surrendered to God and said, “May it be done to me according to your word”. Let us all surrender ourselves and open our hearts to do God’s work.

2020 photos have been added

Check out the Photos in the Media Gallery >

New videos have been added to the ACTS YouTube channel!

Check out the Videos in the Media Gallery >

Salesian Sisters in Cambodia and Myanmar

The Salesian Sisters saw the need for education, human promotion and development of youth, especially of children and young women, particularly in the area of women and youth education, primary education and skills training. Read more at their website >

12 years of Evangelization and Works of Mercy 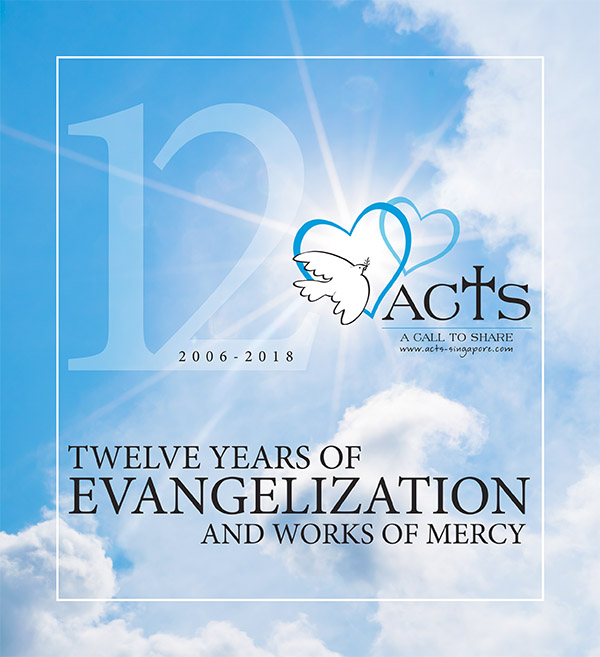 The stories and testimonies in this commemorative booklet are the "good fruit" we hope you will enjoy and share with your friends. These works and projects of ACTS were presented as a gift to our Holy Father Pope Francis at a papal audience on 28th May 2018. View book (PDF 6.3MB) >